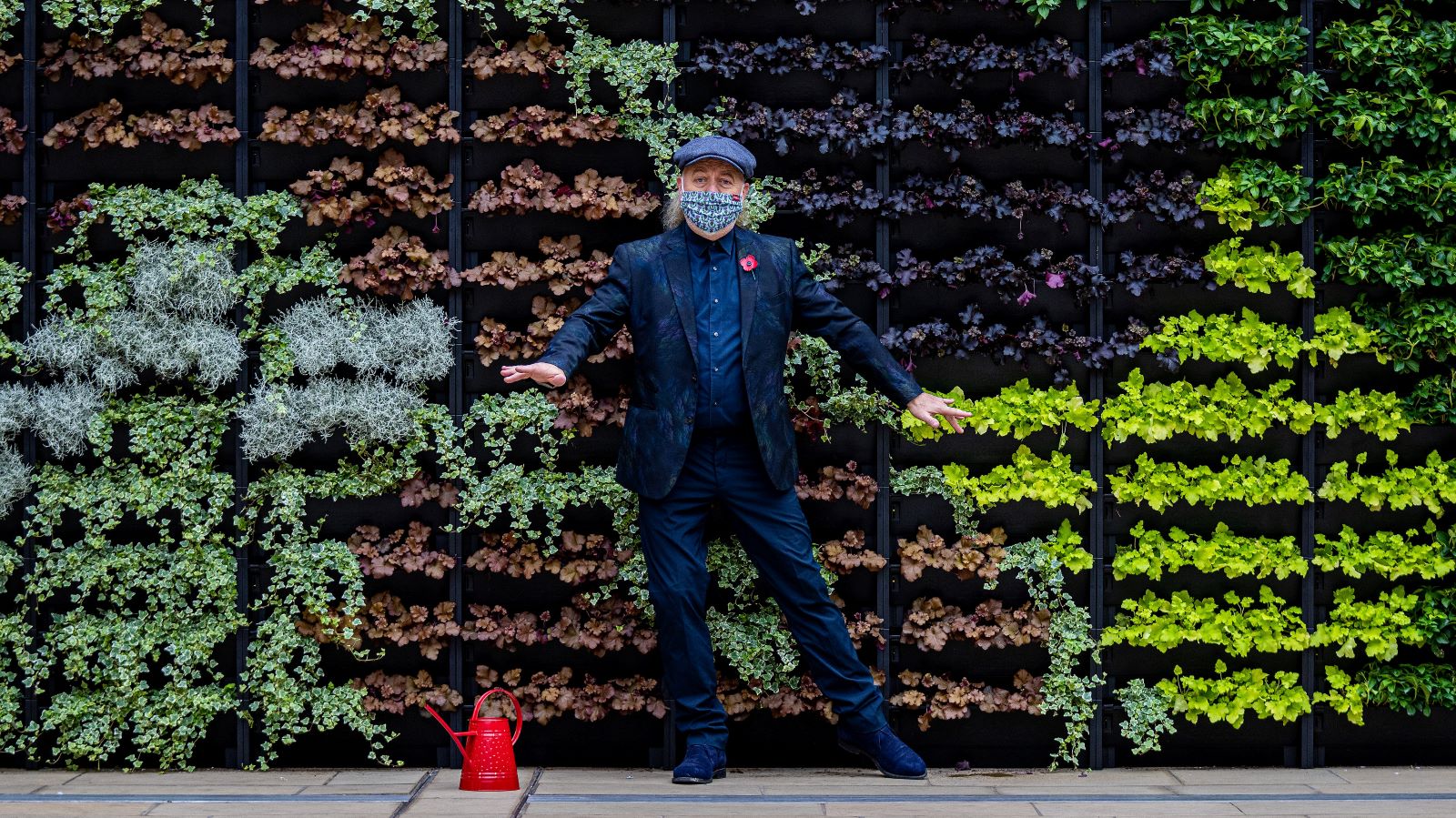 Comedian Bill Bailey has today (Monday 8 November 2021) visited the Azuma Living Wall which has been created by London North Eastern Railway (LNER) at Edinburgh Waverley Station to raise awareness of the small changes that people can choose every day to help lead a more sustainable lifestyle – including travelling by train.

Bailey, who is passionate about conservation and environmental issues, travelled to Scotland during COP26 on an LNER Azuma service, with rail travel being his preferred way to travel domestically and in Europe.

The Azuma Living Wall has been built to mark COP26 along with the launch of a new LNER Environment Report to promote rail as the most sustainable mode of motorised transport. More than 600 individual plants from six species have been used to create the Azuma Living Wall, which has been created to look like an iconic LNER Azuma train.

The wall is fast becoming a growing attraction at Edinburgh Waverley, and is on display until 12th November for travellers to experience in the station. Visitors to the installation will also be able to take home a limited number of Scottish wildflower seeds from Arbroath to grow in their own gardens at home. The installation measures 6m wide by 2.5m tall and weighs 1000kg. It has been created to encourage more people to consider travelling by rail, with research showing that switching just half of domestic leisure journeys to rail per year would save around 331kg of carbon emissions per person.

The Azuma Living Wall has been hand planted in Scotland and represents LNER’s ongoing commitment to sustainability, from the new Azuma fleet of trains to the way in which we process our waste and reduce water usage.

Travelling by train is the most eco-friendly mode of motorised transport, particularly on LNER’s world-class Azuma fleet which runs on electricity on many routes including between Edinburgh and London. LNER is calling on customers to join them in reducing carbon emissions by pledging to take more journeys by rail.

The LNER Environment Report consists of LNER’s programmes to support the sustainable business objectives of the company. It maps out future plans to reach Net Zero carbon by 2045 including increased traction and non-traction decarbonisation, waste and water initiatives and improving air quality on board and in stations.

The report is available to customers in a digital format on the LNER website and illustrates the extensive route-wide plans in place to tackle climate change.

The LNER Azuma fleet was introduced in 2019 and runs on electricity between London and Edinburgh along the iconic East Coast Main Line. Azuma trains also serve other popular LNER destinations in Scotland including Glasgow, Inverness and Aberdeen.

In the first two years of the fleet’s introduction, it is estimated that more than 26.5 million litres of fuel have been saved as a result of the bi-mode capabilities of the Azuma services, which allows the train to switch between electric lines and diesel modes where needed.

The Azuma Living Wall has been developed in partnership with the Royal Botanic Garden Edinburgh which has a mission to promote biodiversity and green tourism in the city of Edinburgh. The wall consists of plant box units that have been developed by Biotecture, a leader in sustainable living wall systems. The units are made of recycled materials and are fully recyclable. The installation has been built by GP Plantscape, a local supplier from Lanarkshire which specialises in cultivating and building plant displays.

Bill Bailey, comedian and actor, said: “I’m passionate about our planet and always eager to make small changes to help do my part to protect it. I am visiting Scotland for the second week of COP26 and I travelled here with London North Eastern Railway. Train travel is one of the most sustainable ways to travel in the UK. Just switching half of your domestic journeys each year from car or plane to the train would save 331kg of carbon per person – that’s the weight of two adult lions!”.

David Horne, Managing Director at LNER, said: “Adopting greener travel habits is something all of us can strive towards, and the Azuma Living Wall is an eye-catching visual representation of how the train is one of the most sustainable ways to travel, especially compared to cars and planes.

“As normality resumes, travel increases and carbon emissions inevitably rise, so we hope to inspire people across the nation to consider taking the train to reduce their carbon footprint, and collectively make a real difference.”

After the 12th November, the Azuma Living Wall will be derigged into sections and the plants will be donated to local schools in the area to help inspire the next generation about supporting the environment.