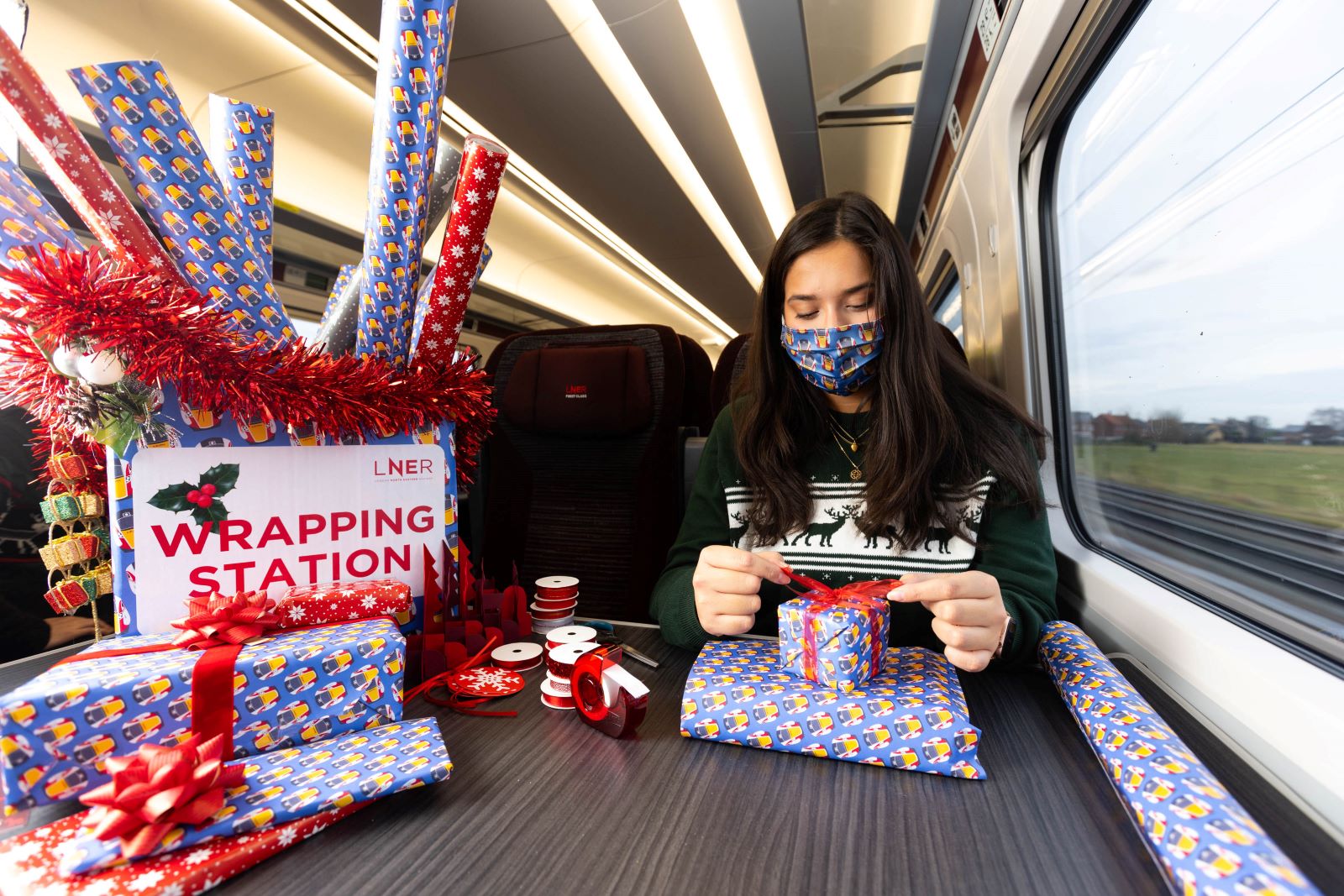 London North Eastern Railway (LNER) is giving customers a helping hand with their Christmas prep this year, with a team of professional gift wrappers onboard special ‘gift wrapped services’ between London King's Cross and Leeds.

Customers in standard class can scan a QR code at their seat and a member of staff will swing by to collect their gifts, before returning them expertly wrapped and ready to put under the Christmas tree. There’s a choice of traditional wrapping paper or a bespoke ‘Azuma’ design, featuring LNER’s cutting-edge, bi-mode trains.

The complimentary ’gift wrapped service’ uses LNER’s popular ‘Let’s Eat - At Your Seat’ app, launched in July 2020 to deliver food and drink directly to customers’ seats. Following the popularity of the trial on Wednesday 15 December, we will be offering the at-seat wrapping service on the following trains on Monday 20 December:

The service has been launched after new research from LNER found that millions of Brits are woeful at wrapping – one in four (24 per cent) have been criticised for ugly gift packaging and one in five (19 per cent) admit they don’t have the skills to wrap a gift properly. The research also shows that that gift wrapping is the third most stressful part of Christmas, behind shopping for gifts and preparing Christmas dinner.

The number of people planning to travel to see friends and family is expected to rise considerably this Christmas. Less than half (47 per cent) travelled this time last year, however that figure is set to rise to almost two-thirds (64 per cent) in 2021.

Rail travel is expected to be the most popular form of transport, other than driving, with 17 per cent of Brits boarding a train as part of their Christmas travel plans – this number jumping to over a third (34 per cent) of 18-24 year olds.

Danny Gonzalez, Chief Digital and Innovation Officer at LNER, said: “This fun wrapping service highlights how we can use mobile technology to enhance the on board experience for our customers. We’re able to offer bespoke services on specific trains which customers can enjoy with a simple scan of a smartphone.

“The idea was born out of our innovative ‘Let’s Eat at Your Seat’ delivery service, which has saved customers from travelling to and from the onboard café during the pandemic. It’s been a huge success, so we see that delivery via smartphone is here to stay and is just one of the many ways we’re using technology to make people’s journeys more efficient and enjoyable.”

Simon Wigzell, Chief Wrapper at Let’s Get It Wrapped, said: “We’ve wrapped gifts in some unusual locations before, but never onboard a train! We know that a lot of people struggle with gift wrapping, so hopefully this service provides a bit of help for people travelling this Christmas. There’s nothing quite like placing a beautifully wrapped gift under the tree, for someone you love.”

LNER’s Let’s Eat At Your Seat service was launched in July 2020 after being successful in LNER’s FutureLabs initiative, which provides a platform for innovation and technology to be introduced into the rail industry. 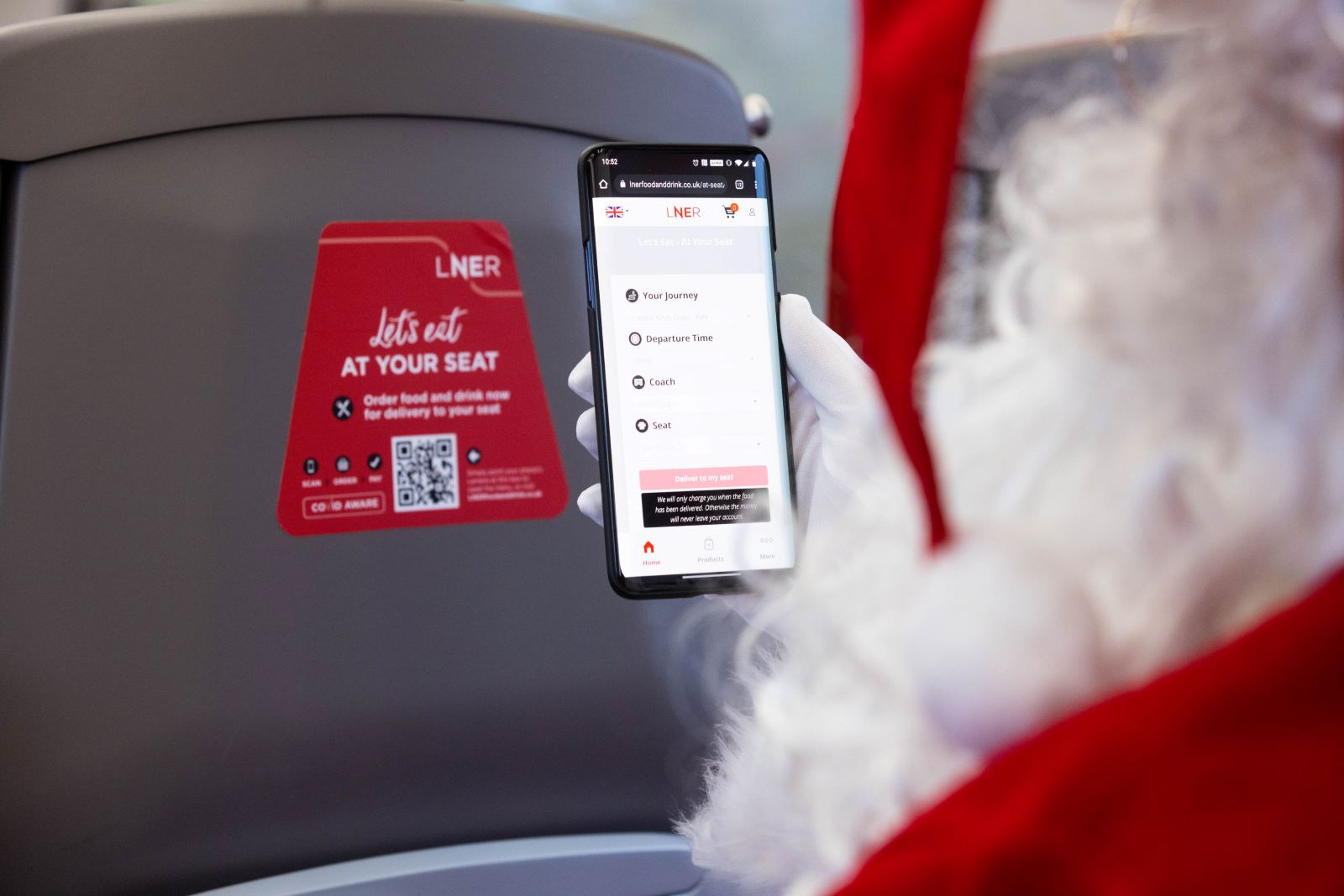