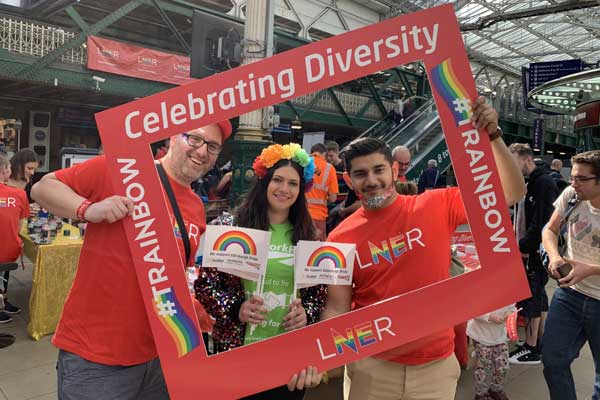 York, Edinburgh, Newcastle and Doncaster are among the locations LNER have been supporting Pride celebrations over the summer months . Plans have included decorating stations in Pride colours and a free pop up glitter bar being available to help visitors and customers add some extra sparkle to the celebrations.

To launch the Summer of Pride, LNER staff from across the business welcomed organisers from all three of the Pride events at York Station alongside the LNER Pride Train. Adorned with a rainbow LNER logo and a rainbow heart, the train has been travelling up and down the East Coast, encouraging people to share their love for Pride by using #trainbow on social media.

LNER community partners, the Campaign Against Living Miserably (CALM) have also be taking part in the Pride activity and using the events as a way of promoting the Mental Health support they offer.

Jennie Pitt, People Engagement and Corporate Responsibility Manager at LNER, said: “We are really focused on creating an inclusive workforce where our people feel able to be themselves at work.

“We’re therefore delighted to be involved in Pride events across our route. It’s a brilliant way for us to demonstrate our support for the LGBT+ community and to help our customers and employees get involved in the celebrations.”

Greg Stephenson, Chair of York Pride, said: “We are thrilled to be working with LNER, their commitment to Equality and Diversity for employees and customers alike is wonderful to see. It wouldn’t be possible for the York Pride team to deliver our event, which has grown to become the largest free one-day event in York, without the support and sponsorship of large local employers like LNER.

Simon Gunning, CEO of the Campaign Against Living Miserably (CALM), said: “We’re delighted to have a presence at this year’s Pride events alongside our long-standing partners LNER. With research showing that 52% of LGBT people have experienced depression in the last year, it’s crucial that we’re working with the LGBT community to raise awareness of these issues and of the support that is available if anyone is going through a tough time.”

In addition to the work we undertake to support Pride events, LNER recently signed up to an industry #nobystander campaign led by the Transport Salaried Staffs’ Association (TSSA) which demonstrates their support for an inclusive and diverse culture. As part of this work LNER has also signed up to the Stonewall Diversity Champions programme, specially focussed on creating a supportive working environment for their LGBT colleagues.

TSSA Organising Director, Nadine Rae, said: “It’s really great to see LNER signing our No Bystander pledge and I pay tribute to them for getting on board. Commitment like this is crucial if we are to transform the rail industry - making it inclusive for LGBT+ people by 2025 in accordance with our Inclusive Rail campaign.

“With our partners at Stonewall we want to encourage and educate our workforce, reaching out across the rail industry. So, I now hope to see other train operators signing the pledge, showing acceptance and refusing to be a bystander!”

LNER’s Partnership with the Campaign Against Living Miserably

The 10 October 2018 was World Metal Health Day and saw LNER officially launch our partnership with CALM. LNER have partnered with CALM to help combat the stigma of ill mental health and prevent suicide; the single biggest killer of men under 45 in the UK. With 310 lives lost on the tracks between 2017 and 2018, it’s an issue which has a huge impact on our people, customers and communities. Through our partnership with CALM we want to help them with their live saving work.

Colleagues from all across the East Coast route have been supporting CALM in various ways including station activity, sponsored events and supporting campaigns. To date, colleagues have helped raise over £46,000 for CALM. The summer will see over 20 colleagues taking part in the York 10k and the Great North Run to raise money for CALM.

In addition to this, as part of the launch we introduced the option for our customers who have been delayed on our services by 30 minutes or more the option of donating their Delay Repay compensation to CALM. Through the generosity of our customers, so far 959 donations have been made, totalling over £36,000 for the charity. 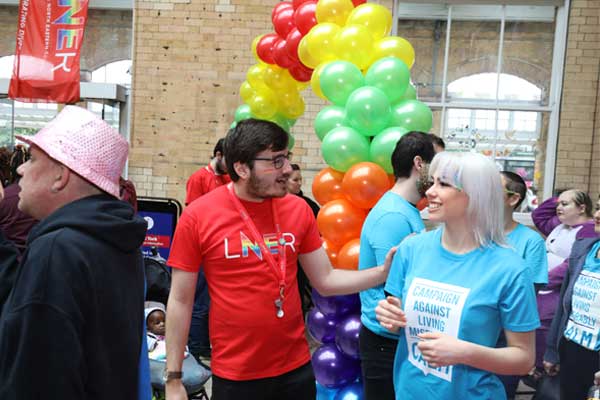 The Campaign Against Living Miserably (CALM) is leading a movement against male suicide, the single biggest killer of men under the age of 45 in the UK. Three in every four UK suicides are men (ONS 2018) and every day on average 12 men take their own life in the UK. CALM works to prevent male suicide by providing services for men who are down or in crisis, and by campaigning for culture change around issues including suicide, mental health and masculinity. To find out more about LNER’s partnership with CALM, please visit our website

August saw LNER run their second ever Summer Academy; a week of activities for 16-19 year olds to experience the rail industry from behind the scenes. The Summer Academy will give young people the chance to participate in several workshops over the week and meet many colleagues from a variety of departments with many different career journeys. The aim of Summer Academy is to inspire a new generation into rail and showcase that there’s a lot more to the industry besides the track and the train.

The Campaign Against Living Miserably (CALM) is leading a movement against male suicide, the single biggest killer of men under the age of 45 in the UK. Three in every four UK suicides are men (ONS 2018) and every day on average 12 men take their own life in the UK. CALM works to prevent male suicide by providing services for men who are down or in crisis, and by campaigning for culture change around issues including suicide, mental health and masculinity.