Azuma welcomed to the north by legends of the east coast 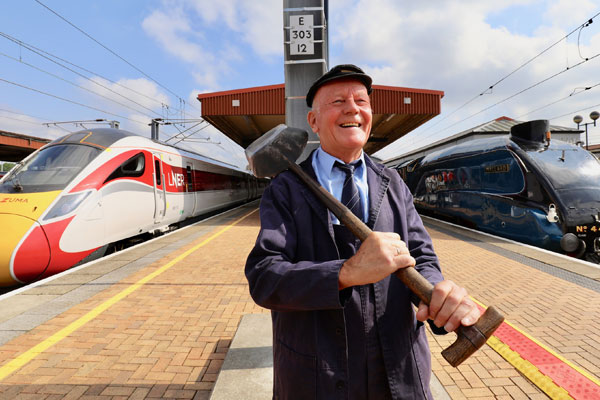 Legendary locomotives of the London North Eastern Railway (LNER) will appear proudly alongside an LNER Azuma train at York and Darlington today ahead of Azuma passenger services launching later this week between London, York, North East England and Edinburgh.

The National Railway Museum’s world record-breaking A4 locomotive Mallard, which set a new speed record for steam on 3 July 1938, will be at York station today to officially welcome Azuma to the city.

LNER has been working closely with the National Railway Museum for the event, which is a very rare outing for Mallard as it has not been on display at York station for 30 years. After a short ceremony to launch LNER’s new Azuma services, the preview Azuma train will make the short journey north to the railway town of Darlington where it will be welcomed, side by side, by Flying Scotsman.

Mallard was designed by Sir Nigel Gresley when he was Chief Mechanical Engineer at LNER. The A4 class locomotives with their distinctive streamlining, cut the journey time from London King’s Cross to Newcastle to just four hours.

Also designed by Sir Nigel Gresley, Flying Scotsman was originally built in Doncaster for the London and North Eastern Railway as part of the A1 class of steam locomotives. Flying Scotsman set many new records: hauling the first non-stop regular service between London and Edinburgh in 1928 and in 1934 became the first locomotive in the world to achieve an authenticated speed of 100pmh.

“LNER is unique due to our rich heritage of history-making people, trains and milestones. Sir Nigel Gresley, Flying Scotsman, Mallard and the famous speed records are part of the deep well of inspiration we draw upon to drive us further forward in creating new milestones for LNER.

“Azuma is a great example of how we are transforming rail travel, much in the same way our predecessors have done whether that be through the likes of the Class A4s, Deltics, HSTs or Class 91s. They’ve all been great trains that have served LNER customers well over the years, and Azuma now continues that proud tradition of setting new standards in rail travel.

“The original Flying Scotsman service is much older than the locomotive of the same name, operating between London and Edinburgh from 1862.  Throughout its 157-year history, and through several different incarnations, the service has endured as a symbol of speed and excellence on the East Coast route. We are excited to be continuing that proud tradition.”

Thursday 1 August 2019 will be the first day Azuma passenger services will begin from London to York, North East England and Edinburgh. 65 new Azuma trains will replace all of the existing LNER fleet of 45 trains by summer 2020.

Judith McNicol, Director of the National Railway Museum, said: “I am honoured that Mallard and Flying Scotsman – two icons of British engineering from the steam age are appearing today in this unique event to welcome the next generation of high speed trains.

“As well as celebrating the rich and proud history of the East Coast Main Line, it is important to tell the story of the modern rail industry and how the railways continue to shape our lives, connecting communities and bringing people together.” 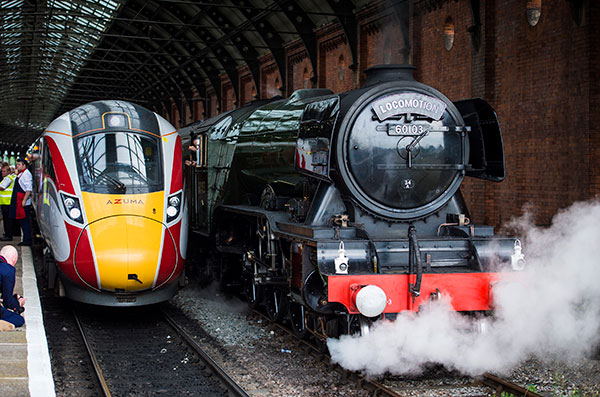 Photo above is the LNER Azuma train alongside Flying Scotsman

The environmental benefits of the new trains are transformational. The Azuma fleet will cut harmful emissions by 90 per cent compared to existing High Speed Trains (HSTs) as well as reducing noise at stations and for communities living along the East Coast route.

The inaugural northbound London King’s Cross to York train on 1 August will:

The inaugural Edinburgh to London King’s Cross service will be LNER’s flagship ‘Flying Scotsman’ train will:

The inaugural northbound London King’s Cross to Edinburgh train will: